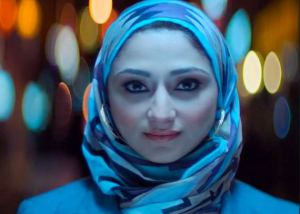 I really like this article. I have been very torn about the hijab. One the one hand, I believe it’s wrong to discriminate against someone’s choice of dress or religion. But on the other hand, most women don’t really choose this. If someone wants to wear a hijab, that’s great- I have no problem with that. But the majority of women who wear the hijab do so because they have to, or because they have been raised to believe that they must. When your family will shun you or you can get beat up for not wearing it, or when your religion promises negative consequences, or when you feel like less of a person for not wearing it, then there’s not really a choice- even if you convince yourself that you want to wear it.

I know it’s not exactly the same thing, but I once convinced myself that I liked clothing standards that I actually didn’t like very much too. The Bible college I went to was very conservative- skirts that covered the knee completely and tights to every class and church service, high necklines and nothing tight, no dangly earrings or flashy jewelry, no watching movies unless expressly approved by the staff (they only approved Christian films), etc. At the time, I convinced myself that I really didn’t mind the rules. They were for my own good, they made me a more modest person, I liked them. But I didn’t like them. I love dangly earrings and big jewelry! I loved them before college, and after college I rediscovered my love for them. Back then I would catch myself drooling over clothes that I could never wear there and lamenting because modifying it to be modest enough would have ruined the look. When the formal banquet came around, we had to do a modesty “hallelujah” test- we raised our arms above our heads, and if our armpits or shoulders were showing, we had to wear something else or modify our shawl placement. Many girls wore tee-shirts under their beautiful dresses or sweaters over them in order to meet this very strict standard. It looked friggin’ awful half the time if you couldn’t find an appropriate and stylish shrug and a prom dress with a high enough neckline. Some girls were able to make it look good, but most of the time the beauty of the dress was just lost.

In my particular case, and I think for many other girls I knew there, I believe this was a coping mechanism. In order for me to reconcile with my beliefs, I had to convince myself that I agreed with the rules, throwing out my ability to choose for myself. I told myself I dressed modestly because I wanted to- but that wasn’t really true. Not when I was truly honest with myself, which was very hard to do back then. I dressed modestly because I had to, because it’s what the other people in my faith did in that setting, because I was taught that I was “more spiritual” if I dressed that way. I fit in when I looked that way.

Of course I cannot say that all Muslim women are in the same position I was, everyone is different and their culture is vastly different- but in the few instances I’ve seen where they defend their love of the hijab, I see a similar reaction in them that I once had, except in this case it’s much bigger and more dangerous.

Women should never be oppressed, whether they choose to wear a hijab or not. I would NEVER support forcing a women to not wear one- but I would also highly support any programs that helped to give women a CHOICE. I am torn about the commercial featuring the hijab as a form of diversity- I honestly don’t know what I think. Women who wear hijabs in the US are often bullied for it, so in that regard I am glad to see diversity shown in a public way. But it is more often than not a sign of sexist oppression… should that be glorified in the name of diversity? I don’t know. But I do think this article opens dialogue that needs to be started. If you haven’t read it yet, please see the link above before commenting.

Preserving a woman’s right to choose doesn’t mean that they don’t sometimes experience pain or remorse from abortions- especially if they were pressured into it or their care provider was not very good- or that birth control doesn’t sometimes affect women with side effects. Every woman is different emotionally and biologically, and every situation is different- that’s why they need to be able to choose for themselves and also be aware of any risks. They need to make the best decision for THEM- sometimes that means birth control or abortion, sometimes it doesn’t. Prepare them, educate them, let them grieve and share their stories even when they’re not positive- but don’t take away their right to make their own decisions.

Not every woman has the same experiences. For some women, having an abortion was ok- a bit emotional, but not a depression causing event. For others, it was their only option and without it their lives would have been much worse. For others, it was a very traumatic event that they regret. ALL of these women’s stories are valuable and should be heard.

Hopefully someday we will live in a world where a woman’s choice is not judged, where she can be fully educated and prepared before making any choice to lessen distress and harm. The point of feminism is that every woman’s choice and experience is valuable, each voice should be heard, and every woman should be free to choose her own path. 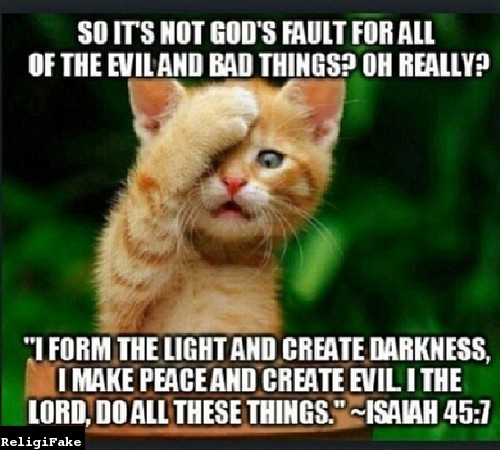 I have heard many people say that they do not blame God for various things. I don’t believe he exists- but if he did, I would certainly be blaming him for a LOT of things! Here are a few of the ones I hear a lot and my rebuttals:

1. Their family and friends may be going to hell for eternal torment, leaving the person without their loved ones forever. But they don’t blame God for this.

Answer: Why WOULDN’T you blame God for this? He made the system, he gave you an immortal soul and then created the rules that would send your loved ones to hell, separating them from you. Regardless of why he made these rules or what part we have to play in them, he made the rules and he made the system- he could have made another way that didn’t require torment and separation of dissenters- so it IS his fault.

Picture this: A dictator makes a set of rules. “You have to follow all these rules perfectly or swear undying loyalty to me. If you don’t, you go to the concentration camps.” Some people can’t follow the rules but don’t want to serve him either because they don’t think he has the right to treat people this way, so into the concentration camps they go. Would you blame the dictator? After all, it was technically the peoples’ “choice” and “rebellion” that sent them there. But wasn’t it an unjust situation to begin with? Isn’t any suffering that results from this unjust system the dictator’s fault? And shouldn’t people have the right to leave that country if they want, and live somewhere that is less violent? But of course you don’t have that option with the God of the Bible… it’s his way or the highway, and screw anyone who doesn’t fall in line with his twisted system.

2. Suffering in the world is not God’s fault.

Answer: I’ve heard it before- sin entering the world is what causes bad things to happen, it’s not God’s fault, free will can’t be interfered with, etc. But that’s not really good enough, because he allowed sin to enter the world and he says he will answer prayer! So why does he ignore prayers to end world hunger but answer prayers to help you find your lost keys? Why would he interfere with free will to help you pass your math exam, but let free will reign when priests molest children or women are raped? It doesn’t make any sense. Either God is not capable of answering these prayers, or he is ignoring them. So yes, the suffering in this world IS his fault!

Even if he only answered prayers and didn’t fix anything that wasn’t specifically prayed for, the world would be a much better place within a few moments.

But it isn’t- so it’s his fault for not sticking to his own word. He is either a liar, impotent, or unjust in how he determines which prayers to answer. Or, maybe he doesn’t exist and it’s all random chance and the results of our actions. That’s what I believe- because it makes the most sense.

3. Evil came into the world through Adam and Eve’s sin, so the results of sin aren’t his fault.Answer: I could go into how silly the whole Adam and Eve story is, about how the tree was made to be very enticing instead of gross and he put it right in the middle of the garden with a tempting serpent as though God WANTED them to eat it and was setting them up- but let’s assume that he really didn’t want them to eat it and all of that is just silly coincidence. Here’s the problem:

I form the light, and create darkness: I make peace, and create evil: I the Lord do all these things.n—Isaiah 45:7

It’s pretty hard to get around that verse, although I’ve heard some pretty impressive verbal gymnastics making an attempt; I did it myself during my time in Bible college. But there’s not really any way around it- God made evil. He created evil, he knew beforehand that Satan would rebel, he knew about all the suffering- and yet he made evil anyway. And then he has the AUDACITY to PUNISH people for being evil?? What kind of sick being is this?!?!

So yes, if he exists, then he is FULLY responsible for any and all suffering that results from the evil he knowingly created. He is 100% responsible for every single person that he killed in the Old Testament or torments in hell for being evil because evil being in the world is HIS FAULT.