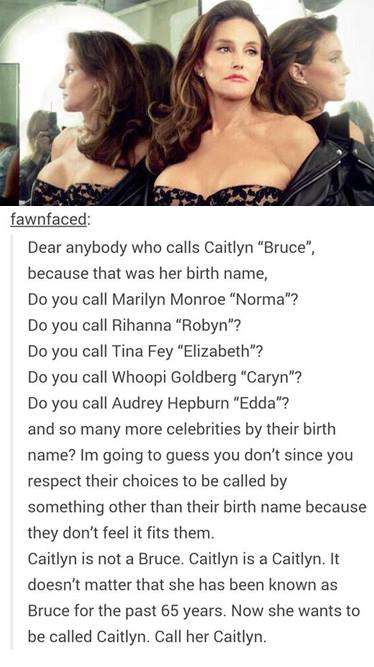 Lots has happened since Caitlyn Jenner was revealed to the world. For those who somehow haven’t heard yet, Bruce Jenner is no more- now she is Caitlyn Jenner, a beautiful transgender woman who has endured much scrutiny and hatred since she decided to step outside of people’s comfort zones to be herself. She’s a hero- but not everyone feels that way. Lots of people have been making incredibly hurtful comments saying she isn’t heroic at all.

“People who are transgender — yes, including Caitlyn — open themselves up to horrifying levels of hate and discrimination just for the chance to be themselves. The rate of violence against transgender people remains truly staggering in the U.S., as is the lack of understanding within the larger American community about what transgender people go through every day of their lives.

In 2015, the decision to open yourself up to hate for an opportunity to feel comfortable in your own skin is one of the bravest things you can do….

…Of course, this is not to say other people…… are undeserving of an award for their own bravery. Of course they are. But prejudice in this country against the transgender community is undeniable. The vast majority of us cannot and should not pretend to understand how terrifying it must be to come to terms with the fact that what you see in the mirror does not match what you feel in your heart. And we shouldn’t act like we do either.” http://huff.to/1IpbNQF

You think openly transgender people aren’t brave? They face a 66% risk of violence, they are one of the highest at risk minority groups right now. People literally try to assault or kill them just for existing, and that’s not counting the intense social stigma that constantly beats them down.

Caitlyn Jenner is a hero, and anyone who thinks otherwise doesn’t understand how much bravery it takes to be open about being a transgender person. There are many kinds of heroes, and people who stand up against social oppression and stigma are among them. Try walking in their shoes, then say they aren’t brave!! You can have your personal beliefs and still acknowledge that what she did was scary and difficult. You can have your beliefs and still stop saying that transgender people are confused or messed up, because they’re not. You’re not in their heads and bodies, you do NOT get to judge them or assume you know better than they.

Yes I’m mad. I’m mad because I see articles about yet another transgender teen that killed themselves in despair, or another transgender person being assaulted out of prejudice, but people keep saying awful things about them and stoking the fires of prejudice and hatred. Your words have consequences. Belittling or demeaning them causes them more harm than you can possibly imagine. It may literally contribute to their deaths. It’s that serious.

Stop the judgment. Stop the stigma. Stop letting your religion override your compassion and empathy for others. Listen to their stories instead of telling them that they’re just “a man dressed as a woman”, because that is incredibly hurtful and untrue.

Here is a great article for those who would like to understand a bit more of what it’s like to be a transgender person.

And some of the countless examples of violence against transgender people.

No trolling, please! Genuine dialogue for the purpose of mutual understanding is appreciated; debates are not. General comments are welcome. Cancel reply